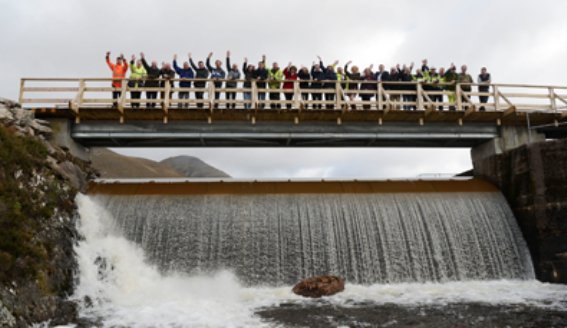 Ancala Partners (‘Ancala’), the independent mid-market infrastructure investment manager, has now commissioned or acquired 11 investment projects through its portfolio company Green Highland Renewables (‘GHR’) with the completion of its latest hydro scheme at Loch Eilde Mor in the Highlands, Scotland.

The £13.6 million scheme, situated at Kinlochleven, is a high head run-of-river scheme with a 2MW triple-jet Pelton turbine. The project has the highest energy generation of all GHR projects to date and gives GHR storage capacity due to the loch-fed nature of the project.

The projects completed with GHR so far have a total capacity of 16 MW, which is sufficient to power 20,000 homes.

Ancala believes the UK hydro sector offers the potential to deliver attractive, low-volatility returns. It invested in GHR as a platform to execute a consolidation and development strategy within the sector and has since been proactively implementing this approach. Since Ancala invested in GHR in April 2015, the company has experienced significant growth, which has included the development of nine hydro schemes and the acquisition of a further two hydro sites.

Spence Clunie, Managing Partner, Ancala Partners, commented:
“Prior to our investment, GHR was largely a development focused company but now it is also a portfolio owner and operator of a high quality and diversified portfolio of hydro assets. Loch Eilde Mor marks another significant milestone in GHR’s growth.”

Ian Cartwright, Managing Director, Green Highland Renewables, commented:
“Loch Eilde Mor has been a very exciting project for us and demonstrates our ability to develop large hydro projects. Ancala’s involvement has been invaluable in allowing us to build a portfolio of such projects.”

Earlier this year, Ancala announced that it had raised £51 million of debt facilities for Green Highland Hydro, the asset ownership vehicle for hydro power assets developed by GHR. The facility has been used to support construction of the schemes and refinance capital invested in operational assets. It followed a quadrupling in the size of GHR’s portfolio since Ancala’s initial investment. Since Ancala invested, GHR has significantly outperformed its operational and financial targets.

Ancala launched its Mid-Market Infrastructure Platform in February 2016 to meet the requirements of long-term investors looking for enhanced returns from core mid-market infrastructure investments. Ancala now has over £800 million in funds under management (as at end-June 2017).

Ancala is based at 40 Gracechurch Street, London EC3V 0BT.

About Green Highland Renewables
GHR is a Scottish company with offices in Perth and Dingwall.

It has been developing run-of-river hydro schemes since 2007, from initial concept through to consent, construction, commissioning and generation.  It has extensive in-house capabilities covering planning, development, civil, mechanical and electrical engineering, as well as operations and maintenance.

It has developed over 50 hydro schemes with approximately 40MW capacity.